Well, of course Eli Greenblat is sympathetic to what retailers say. He’s the Fairfax “retail reporter” after all (one of the great dangers in specialisation is that the reporter identifies with the speciality instead of the reader. I try to pay attention and avoid this myself).

The ‘money quote’ is this: "Election periods always, always, affect us and the fact that it has been called so early is an absolute disaster, [Specialty Fashion Group CEO Gary] Perlstein said. 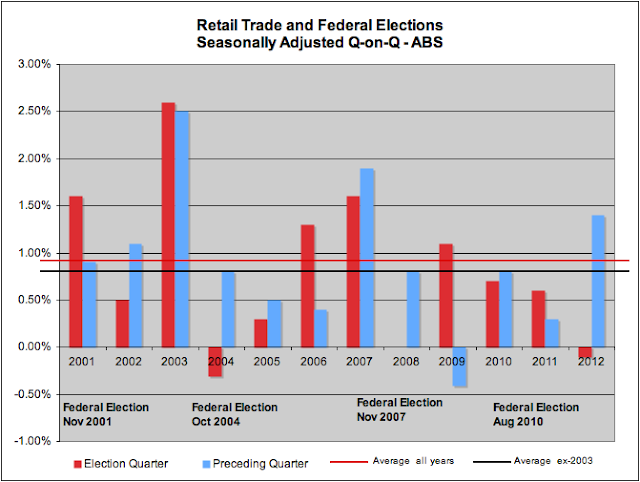 One datum is missing – in 2008, December quarter seasonally adjusted retail growth was left out because of the government’s stimulus package.

Something odd happened in 2003 – there was killer retail growth. If you eliminate the outlier, what do you see?

What about clothing retail alone, since that’s what Specialty does?

Nope. The clothing retail item, seasonally adjusted, in the ABS data set is just as likely to rise ahead of an election as it is to fall.

However, the ground is prepared: if Specialty doesn't perform in 2013, we know what excuse will be given.

Posted by Richard Chirgwin at 5:46 PM