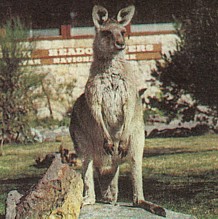 “What’s that Skippy? You need wide-ranging and draconian powers over the innocent activities of ordinary citizens? But why would you need that?”

“You can’t really believe that. Not everybody’s a criminal, Skip.”

“Nobody is innocent? Doesn’t that sound more like the sort of thing you’d hear in an oppressive regime than in a place like Australia?”

“I didn’t say it was like the Stasi. I was just wondering whether you were seeking power which was excessive and could ultimately be abused?”

“Let me get this straight, Skippy. You’re saying the power could be abused if you were the kind of police force that abused its power, but that this has never happened in your experience as the kangaroo in charge of the entire NSW Police.”

“But isn’t the proposal for data to be retained about everybody in all of Australia? Would you have the same amount of trust in all the police services in all of the states, at all times from now until forever?”

“Well, it wasn’t meant to be an insult, Skip. Merely an observation that you can’t predict when there may or may not be a corrupt officer, or a group of corrupt officers working in concert, who may at some time abuse their access to all that stored data.”

“Well, no, Skippi. I mean, yes, I do realize that there are all kinds of nasty people out there. However, these seem to be massively in the minority, since obviously most of us are not in prison, nor are we under suspicion, nor are we under investigation.”

“What do you mean, ‘only because you don’t have sufficient power or resources?’”

“So if all of us were, in fact, police, and all of us had the power to request a warrant to inspect the stored telecommunications data, you’re absolutely confident that you would be able to demonstrate evidence that all of us had committed, were in the process of committing, or were likely to commit a crime of some kind?”

“Except the police, yes. You’re a very sick kangaroo, Skippy.”

Seriously: if Andrew Scipioni meant to scare the hell out of anyone paying attention, he succeeded. I have seen the NSW police commissioner say some creepy things to the camera in the past – he appears to regard pretty much the entire citizenry as already guilty of some crime or other – his performance in front of the Parliamentary Spooks’ Committee was terrifying.

No free country should tolerate a policeman who resents the very rights he’s supposed to protect.

Added: Someone on Twitter just reminded me that Scipioni was in charge of the NSW Special Crime and Internal Affairs unit, at a time when members of that unit were faking evidence to get phone taps against people they didn't like. Nobody on the parliamentary committee thought this taint worth bringing to his attention, heaven knows why.

*If you’re not Australian, or too young, you need to understand that Skippy was a television kangaroo which communicated using little “tsk-tsk” noises.
Posted by Richard Chirgwin at 6:14 PM