Really, it's such a small thing.

The Den Fenella walk is just a lookout walk from the Wentworth Falls Picnic Area.

It's just 1km down and the same back. With a descent that wouldn't upset anyone except if, as Ms T, they've been too sick to attempt the walk for four years, which makes it special.

And because it was laid out by someone who had a soul.

The Den Fenella Lookout walk starts as a somewhat boring descent through the same Blue Mountains heath as everyone sees, even if they only look at tourist lookouts. It's everywhere, including at Bunjaree Cottages, the joint labour of love of me and Ms T.

It passes down past a small bit of hanging swamp, which is also everywhere … so long as the developers don't kill them. They look like useless bits of ground, but they also supply an awful lot of the drinking water that ends up in Sydney's catchment.

After the swamps, the Den Fenella walk drops into a grotto. It's a nice grotto, but if you want grottos of inexpressible loveliness, go somewhere else. This grotto is just … nice. That's all. Nice.

And there's another walk around a hanging swamp, with a bit of walking under the cliff, and then …

You turn a corner and find yourself overlooking a long valley with Mount Solitary pretty much dead-centre of the vista.

It takes the breath away – even for Ms T, who hates heights, detests lookouts, and can only ever drop herself on a rock, as far as possible from the railing, and gaze over the valley as a coward.

The first time we walked the Den Fenella, we agreed: “This is a walk with soul in it. Somebody who loved someone wanted them to see things the way they saw them.”

And despite its brevity, we perceive the soul: the person who wanted someone to get the big reveal, the “glamour” – to quote a movie – at the end of the walk. To walk around some rocks, and suddenly find themselves in a vista of inexpressible beauty.

And a couple of days ago, Ms T managed the walk, walked down the stairs, caught “The Prestige” – for herself, for the first time in four years.

It's only a couple of kilometres. The descent, and therefore the climb back out, is only a hundred metres. But it's a big thing, for us.

Ten years ago, an accidental combination of circumstances led us to take up bush-walking. We started with light stuff – including the Den Fenella – and Ms T discovered to her vast surprise that walking made her chronic back pain (an old fracture to lumbar 3 and lumbar 4) disappear. We spent the next six years expanding our range.

At our best, we could cover 20 km in a day, and those walks formed the basis of the best years of our marriage. You do so much talking in ten hours in the bush.

Just before Ms T first went into hospital, she couldn't walk the fifty metres to a bus stop without help, and it's been a long road back.

I'd given up on some things. For example, I thought that we'd be doing well if we got to finish a 10 km walk without drama. But on New Year's Eve, she declared her own goal is 20 km before the end of 2014.

Doing our personal pilgrimage to the Den Fenella is an ideal way to start. 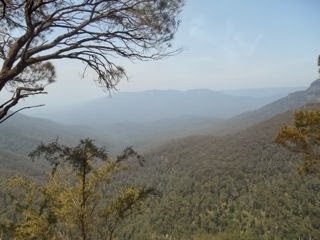 Posted by Richard Chirgwin at 7:23 AM