The NSW premier: an arrant hypocrite


So: here is the NSW premier, Barry O'Farrel, visiting the fire-grounds, screen-grabbed from the toadies at News Limited: 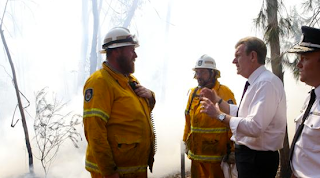 And here is what his government is actually doing about bushfires, courtesy of The Guardian.

While Barry O'Farrell was grubbing around the ashes of homes in case there was a scorched-but-still-usable vote there, back in Macquarie Street, where the fires will never burn, the gimlet-eyed, raisin-hearted ideologues of his government were cutting the budget of the RFS.

Yep: ensconced in the safe city sandstone of Macquarie Street, the state government wants fewer staff on the strength of the RFS.

Oh, and the RFS budget-cut sits squarely against the Abbott government's cynical decision to reduce the scope of emergency payments – while the emergency was happening.

Logistical strength in the RFS is a big thing. For example: the RFS has created the Remote Area Fighting Teams to stop spot-fires in difficult areas getting out of hand. RAFTs were absolutely vital in keeping the State Mine Fire (still listed here) from becoming a town-destroying monster.

Here is our hypocritical Premier blabbing about backburning while staying silent about budget:

“NSW premier Barry O'Farrell says many lessons will come out of the fire crisis for the state government, but he claims credit for his government's commitment to backburning.

“More work to be done” on less budget, Barry?

English lacks a cognate for “a face that needs to be punched”. The German will have to do: Backpfeifengesicht. Look it up.
Posted by Richard Chirgwin at 8:06 PM