Wikipedia: Even as a Wikipedia user, Greg Hunt is a mug


The story so far: to support the contention that there's nothing unusual about the 2013 bushfire season, our environment minister Greg Hunt has made himself a village idiot with a global presence with this statement:

“I looked up what Wikipedia says for example, just to see what the rest of the world thought, and it opens up with the fact that bushfires in Australia are frequently occurring events during the hotter months of the year. Large areas of land are ravaged every year by bushfires. That’s the Australian experience.” (Source: The Guardian)

That's set off a round of ridicule about his use of Wikipedia. That's fair enough, but there's another reason to make fun of Mr Hunt. Even if you believe Wikipedia records bushfire events accurately, Mr Hunt is using a source that undermines his position.

The data presented by Wikipedia clearly indicates increasing bushfire activity. All you have to do is make a chart of how many major bushfire events Wikipedia lists occur each decade.

Note that in this chart, I omit the current decade because it's only 2013. 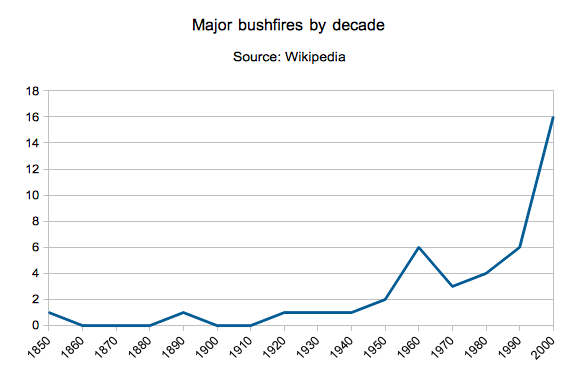 I don't think you need me to add a trendline to get the picture.

Not only that: Wikipedia clearly supports another statement.

The chart below shows the number of days between the official start of summer (1 December) and the first of that summer's major bushfire events, as reported by Wikipedia. Negative numbers indicate that the fire season for that year began in September, October or November before the start of summer. 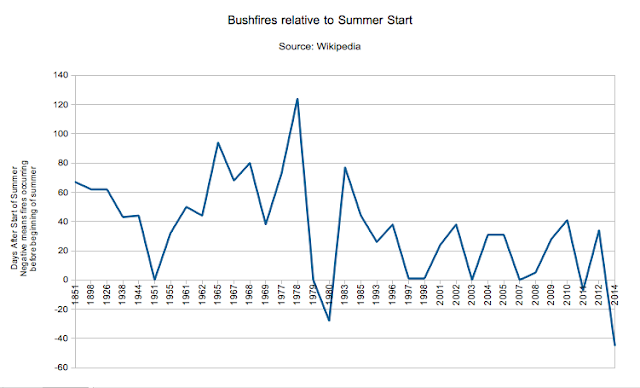 So it seems to me that even as a Wikipedia user, Mr Hunt's grasp of the data in front of him is tenuous, at best.
Posted by Richard Chirgwin at 11:24 AM