[Since I'm on the Western World's Worst Broadband Ripoff this blog post is worth about five dollars.]

If I ever hear another variation on the white Territorian is “better than blacks” meme I'll take the radio control myself to guide the asteroid down on the dump.

There is no human more self-satisfied, smug and utterly hypocritical than a Territory white man whining about drunk blacks.

For the last few days, I've been covering the World Solar Challenge. It's a “best of the best” kind of gig: a combination of serious science, serious competition, camaraderie, and motor-sport excitement without burning dead dinosaurs.

Then I got within pregnant-man's bad-breath distance of Alice Springs, and started encountering the kinds of whites who live by pouring bad grog down black throats, and bleating to tabloids about the outcome.

It's Monday night in this bogan inferno. I've not only eaten shit for dinner, but eaten shit that arrived an hour late because the short-order cooks (in this dump, a mixed menu is means “steak, fish and supermarket curry and is called “innovation”) can blacken Angus in three minutes but need an hour and a reminder for a vegetarian pasta without the bain-marie chips.

Just don't get me started on this town's “we're just like London look we do curry” thing. Tonight, the “curry of the night” was beef vindaloo in three different places I called (before giving up), which tells me either there's a shared kitchen, a shared chef, or a shared brain cell.

My motel requires – I kid you not – a credit card swipe for the contents of the minibar, which are: 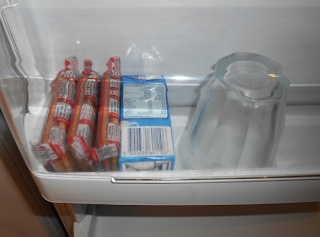 “Where's the water?” you ask. It's in a tap in the bathroom and flows from a bore and tastes of salt. It's captured in the glass shown in the photo, and although the motel runs to a “tavern” that can deliver steak and barramundi faster than pasta, it doesn't run to ice in the room although it's currently around 10:30 and in another hour or two if I'm lucky, I'll see the mercury dip below twenty by running the air-con.

In this WASP's nest, you don't even need to try to get some uninvited opinion about the darkies, Abos and boongs. Just sit still and look a teeny tiny bit not white, like I might in a bad light while waiting for two dollars' worth of pasta charged out at twenty.

Apparently, something in my face or hair or grey pattern or the way I talk strikes some “blackfella buttons” in Alice Springs, which is why I had endure the opinions of one “Katter hat” bigot and two “stupidly fat tourists with turned-back baseball caps” about what's wrong with The Blacks they'd seen.

Except, guess what, the fake pom beer-puller (WHY??? Why will someone from Sydney go to Alice and put on a fake Londoner act?) who can't operate a tavern with just six bloody dinner orders and get them right and in order can somehow:
(You also tried to appropriate a tip with a cash-register adjustment. And you didn't notice that I was using cash to drink, rather than charging to my room. The more I think about you, "Nigel", the more I want you taken to Darwin and fed to a salty.)

Yes, Alice Springs is full of staggering-drunk people and some of them are black! In a couple of hours, sitting still and eating, I've had two offers of fights (one for being a poof, which is the kind of assertion that truckies and fools should test before they get truculent over); I've had a long lecture from Mister White about What's Wrong With the Country, I've watched the bartender try to slide both white and black into a “buy the whole bar” oblivion, and all the rest.

I particularly liked the square-jawed superman wearing his “DuckDuckGo.com” T-shirt (“Dunno, mate, it was a present). If he finishes the third bottle with the girlfriend, you can bet that he'll get discreetly taxied home.

We aren't “better”. We just have more money, which means if the unpleasant square-jawed superman who was given his “Duck-Duck-Go” T-Shirt as a piss-take that he didn't understand finishes his third bottle with his girlfriend, someone will discreetly get them home instead of leaving them to stagger in the street for the Channel Nine cameras.


As it happens, if you visit Sydney with $20 and a taste for red wine and a pub to go to, you won't get served two bottles for it, no matter what. You'll be lucky to get enough Aldi Shiraz Merlot to make you blow 0.049 and get an indulgent raised eyebrow from a cop. But here in the Alice, five bucks will get a white man half a bottle of crap restaurant wine, but every delicate nose will wrinkle at a pissed blackfella.

That's Alice Springs for you.

While sitting in the shit-it's-hot of Ti Tree I met the stone-cold-sober, intelligent, talkative and way-beyond-me-wise shire service manager of the area. He knows shit from shallots, he understands how to talk to a soft city wanker like me while still sounding like a Territorian, he told me twenty things I didn't know in ten minutes, and loves his people. Here in Alice on the street below my window, a city-crap-big-screen-jukebox is watched by white bogan idiots whose bikie-tax is inked on their arms, whose moron-tax is labelled on the cans of flavoured ethanol they drink, and courtesy the pissants among the TV crews they still think they're ahead of the blackfella.

White Australia, you're a pimple on a boil on the arse of a hypocrite, and Alice Springs is your epitome.
Posted by Richard Chirgwin at 12:25 AM