About vectoring: Malcolm is almost right but not quite


“The fact of the matter is that the shorter the copper loop, the higher the speed you will get. There is a new technology, a noise cancellation technology called vectoring, which is now being deployed, which will literally double the speed. So if you had a line which was delivering 50 megabits per second now, with vectoring, which is just a software solution, it's not, you know, it's not expensive to deploy, you can then double that to 100 megabits per second” – Malcolm Turnbull to ABC Radio National (http://www.abc.net.au/radionational/programs/breakfast/malcolm-turnbull-on-changes-to-the-nbn/4557604 here).

“This is the folly of stipulating one particular technology at the outset. FTTN is a much more powerful, much cheaper, much better prospect now than it was four years ago.”

Damn: I have to try to look at vectoring in a bit more detail, because if you don't understand it, you won't see the pea under the thimble.

First, the line-by-line, then the technology.

“The shorter the copper loop, the higher the speed you will get” – Correct.

“There is a new technology, a noise cancellation technology called vectoring, which is now being deployed, which will literally double the speed. So if you had a line which was delivering 50 megabits per second now, with vectoring, which is just a software solution, it's not, you know, it's not expensive to deploy, you can then double that to 100 megabits per second” – here, Mr Turnbull gets things a little bit scrambled.

It's probably not his fault. The industry PR has done a neat job of wrapping vectoring in a superhero's cape.

“Will literally double the speed” – Vectoring will improve the performance to individual subscribers, but the results they see in the real world are subject to a lot of dependencies. "Can" double the speed would be more accurate.

“Just a software solution, not expensive to deploy” – Only if the equipment in place supports it. If you've rolled out a VDSL2 network, and it's new enough, then that might be true. You'll note in the example I refer to below, Austria's A1 Telekom, the upgrade involved hardware as well as software, which is much more espensive than a software upgrade.

I realise that there are people queued up ready to fire their “ALP stooge” guns at me. So here is a much more detailed explanation of my position.

Here is an excellent – and not too hard-to-understand – presentation from Ericsson. For the Tl;dr crowd, the main point is that vectoring exists to take care of a particular kind of noise, far-end crosstalk or FEXT.

If Bob and Alice are both DSL customers – any kind of DSL will do – and they're served through the same cable bundle, then each of them appears as “noise” to the other. That is, Bob's signal will couple to Alice's twisted pair, and since it's not Alice's signal, it's noise, and reduces the capacity available to Alice for communication.

The same thing, of course, happens to Bob: Alice's crosstalk cuts into his capacity.

However, the noise Alice generates is different to random electrical noise: it has some predictable characteristics, because you know it's a DSL signal that's generating the noise. That means you know (for example) which frequency bands will suffer noise, and that patterns that it will exhibit.

And that means – with good mathematics (if you want employment in mathematics, network physical layer work is a good place to start) – you can get rid of Bob's noise on Alice's line, and vice-versa. This is vectoring.

If there were only Bob and Alice to worry about, vectoring wouldn't be a “new thing”. But every house connected through a twisted pair is connected in a bundle of cables.

In a bundle of 48 cables, this would be unmanageable even with vectoring, if every cable coupled its crosstalk to every other cable. Fortunately, that doesn't happen. Lines will couple more strongly if they're close together. More importantly, some lines – for example, where copper degradation or damage spoils the line's impedance – will leak more noise than others.

Ideally, all crosstalk should be cancelled, but Ericsson's white paper notes that “close to optimal” performance can be achieved by concentrating on eliminating the noise from “dominant disturbers”.

And in the case of vectoring, “optimal performance” means the speed VDSL2 can achieve on a single line. “Vectoring” doesn't change the maximum speed available on VDSL2 – it lets more users get closer to that maximum speed in a crowded cable bundle.

In a presentation to the 2013 Broadband World Forum, Gerald Clerckz of A1 Telekom Austria gave a presentation outlining that carrier's experience with vectoring in its field trial in Korneuburg.

A1 Telekom is pleased with vectoring, saying in the presentation that vectoring is “fulfilling the expectations” while also noting that “it cannot be seen as a replacement for FTTH”, but rather as a bridging technology on the way.

With that noted, there is a very wide spread of real-world outcomes achieved in the field trial. At between 250 and 300 meters loop length, customers on the trial experienced download speeds from around 120 Mbps down to around 35 Mbps; customers at above 400 meters experienced speeds between about 22 Mbps up to 75 Mbps. The poor customer at 600 meters was only able to get around 30 Mbps.

I don't have permission to reproduce the original chart, but here are the extremes at different distances: 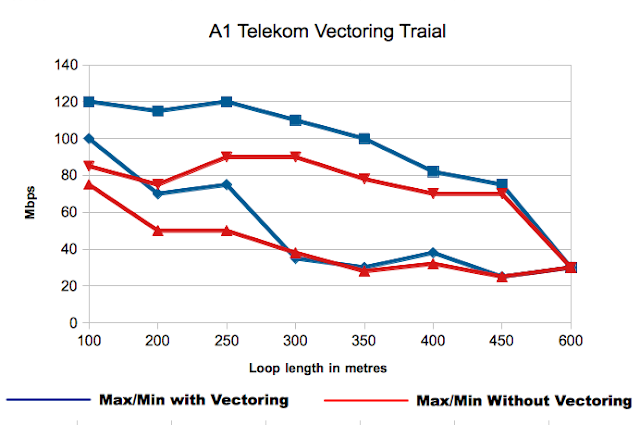 This, remember, is a real-world deployment, not a vendor's claim - and it's a set of data from a carrier that's happy with vectoring. It's a statistically valid sample, as well, since the test covered 500 homes, more than ten percent of the service area of the test.

What's clear, here, is that while vectoring can double speeds, there isn't much difference in the top-to-bottom envelope - and that diference evaporated at 600 meters (however, that may represent fewer data points). At 300 meters, the difference in best-case performance was 33 percent.

Posted by Richard Chirgwin at 3:56 PM