It occurred to me, over the weekend, to take a look at the electoral dynamics of Queensland’s plan to appropriate the output of household solar at a fixed (low) wholesale price, and force households to buy all their electricity at the retail rate.

It seems to be a very bad idea, electorally.

As it now stands, nearly all of the PV installations are in conservative seats; the analysis wouldn’t tell us anything. So I reverted to the previous parliament, in which the ALP held 51 seats.

The data for solar installations was sourced from Australia’s Clean Energy Regulator, which http://ret.cleanenergyregulator.gov.au/REC-Registry/Data-reports reports PV installations by postcode.

In Grass-GIS, the open source GIS package, I associated the postcodes with electorates as a simple overlay. This yields a map in which the areas within each electorate can be matched to the postcode-based reporting of solar PV installations.

Note also that “conservative” electorates aren’t just the LNP electorates: they include seats that were held by conservative-leaning independents.

The key points are easy to see. The seats the LNP already held before the 2012 election:

The situation now – in which the ALP only retains seven seats in the state parliament – would be worse.

The image below provides a visualisation of the analysis. Pink-red shows formerly ALP electorates according to the amount of solar installed in the area; blues illustrate the same in Conservative electorates. 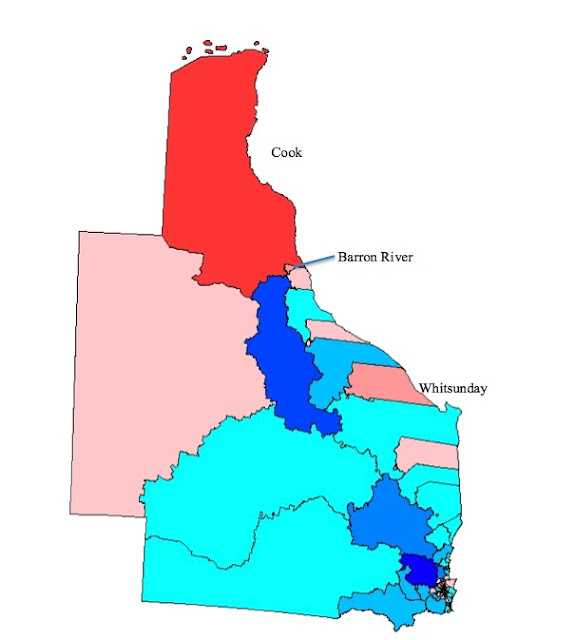 The three electorates I picked out - Cook, Barron River and Whitsunday - were among the mass that changed hands in the 2012 state election, and are now held by the LNP. They're also the "most solar" electorates that the ALP used to hold.

Posted by Richard Chirgwin at 10:54 AM